I was given the best compliment of all. One of the high school students told my husband that "Mrs. Smith is the coolest teacher of all." What did I do to deserve such praise? I didn't torture the high school class with a long drawn out Christmas Pageant! Don't you just hate those pageants that carry on for hours at a time, where children are crying, and parents are ''oohing" and "ahhing" at how cute little Johnny is, even though he's got his finger up his nose?

Originally I had planned on reading a book that told the Christmas story, while my little class acted out the scenes. I wasn't even able to get them to stand still for 5 seconds while I directed them on what to do. Nor could I stop them from giggling. It didn't help that my "helpers" kept commenting on my choice for Mary and Joseph. With only two boys in the class, J. was the only choice for Joseph as I surely couldn't use little 3-year old N. for the part, especially when his older sister was Mary! And so J. and N. (big sis) were Joseph and Mary. I might as well have said they were dating or something. Even in the primary grades, kids get silly over such pairings! And all the K5 girls wanted to be Angels. Four angels, One Mary, One Joseph and a lamb. Hmmm....somehow I don't picture the manger scene looking quite like that.

So I opted for singing and performing one song. Just one. And one that lends itself to some kind of performance. What better song than my all time favorite: The Little Drummer Boy. I searched my house until I came up with at least 7 ice cream buckets (the 5 quart size), covered them with paper and had the children decorate their drums. Then while I sang the song, and those who could joined me, the children marched into the room, drummed their drums, took a bow and the show was over. Thus earning me the title of "coolest teacher ever". Simplicity wins every time. 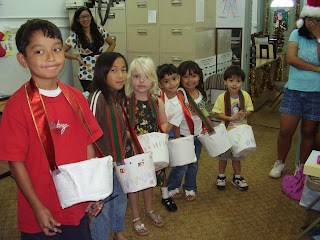 Posted by Colleen at 8:02 PM No comments: 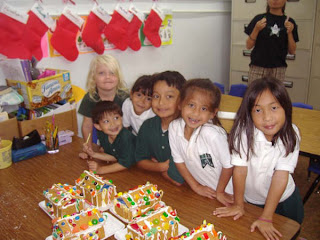 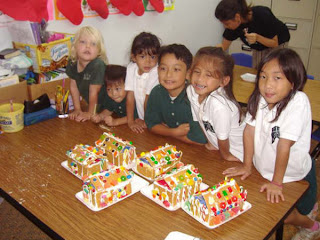 Posted by Colleen at 7:45 PM No comments: