So I’m thinking of all the little things about my dad to remember. It’s easy to remember the bad things that happened. The fights, or the angry words or hurt feelings. But it’s not healthy. To remember the good things is much better.

I started by going back through the emails we have exchanged over the years I have lived on Guam. I have probably communicated more via the written word, then we ever did in person as I was growing up.

The emails I have had this year from my dad, assure me, beyond a shadow of a doubt, that he is with Jesus in heaven. My dad knew the Lord. It wasn’t always this way. I grew up in a fairly neutral religious home. I remember going to church as a child, just vague memories of pews and stained glass. When my younger brother was a baby, I vaguely remember (or maybe was told in later years) that it was too hard to take the family to church on Sundays because my dad wasn’t supportive of my mom’s desire. And without that support it was too hard to bring little kids to church and Sunday school. From 1st to 6th grade or so I remember attending Sunday school sporadically with the neighbor family, the Wrights. We would walk to a Baptist church  on 18th street. We attended VBS there (or at least I did) during the summer and various other kid club type activities.

After we moved to Powell River, there was no more church for me. My mom went to the Anglican church all on her own. Later, married with 2 children I became a born again Christian and started attending a Pentecostal Church. I think I told my mom something about the Anglican church being boring and stuffy.

When my parent’s divorced a year or two later, my dad decided he would try to change and learn to like  the things that made my mom happy. Unfortunately it was too late for their marriage, but in the process he found God. He told me a story about how he attended the Anglican service and during the Peace – where they turn and shake hands with each other – he turned and shook hands with an angel. Most likely it was just a sweet old lady in the church, but something in that simple ceremony touched my dad and I believe he had an encounter with God that day.

So back to the emails. First he sent this simple one:

Here is a question for you:-

"How many times does the word Christian appear in the New Testament of the bible?"

This is such a typical email. Our correspondence would often be short one liners back and forth. A little humor thrown in. A little lesson or seriousness intertwined. With this one I didn’t know if it was a rhetorical question, a joke, or something more serious. I responded with:

My guess is zero. I'm fairly certain it was a word made up after the fact.

I regret I’ll never know what his answer was, as shortly after this email he discovered he had cancer and from there his emails became more serious and guarded.

He also shared a wonderful poem with me. “Truck Lights” by Rene  Fumallo. He heard this on a podcast of the Vinyl Cafe.

My dad and I shared recipes back and forth. He sent me humorous email forwards and I in return did the same.  Ones that reflected his particular type of humor. Like the one I sent him that showed snowmen in various poses. Kind of a Gary Larson style (He loved Gary Larson cartoons).  I said the cartoon reminded me of him. He responded with “my sick sense of humor or are you calling me a cold old fart?”. It was all in fun.

I’ll miss those email exchanges. And the opportunity to see him one more time and introduce him to his two grandchildren, born on Guam, whom he has never met. We will be heading back to Canada late this summer to say our goodbyes.

At least I have the assurance that Dad is in heaven with Maggie and the other children I lost via miscarriage. He is not alone and someday we will be reunited.

I've been contemplating time a lot lately. Like how fast it flies by. I can't believe it's been 3 months since my last post here! I admit, I have other blogs I've been doing some writing on, but that is a bad excuse.

So back to time. The older I get the faster it seems to go by. It is getting downright scary at times to wake up in the morning and suddenly realize it's time to go back to bed and you can barely recall what took up the time of the day. You know the feeling? As Les and I approach 50 (and we admit, he's approaching faster than I am!), it is like we are on this fast flowing river -  perhaps entering the rapid stages, heading towards a water fall - and there is no way to slow it down.

In the big scheme of life, with the hopeful expected lifespan of 100 years, we are only almost half way through life. Which means that we have almost doubled our flow of time since birth. At birth, or let's say 1 yr of age, you have only lived out 1/100th of your life. So time is slow. There is so much still ahead. As a child time moves much more slowly. Remember how long it seemed to take for special holidays to arrive? Or that expected vacation? Looking at my children today I see an endless life ahead of them. Endless possibilities and learning opportunities. And plenty of time to accomplish those dreams.Compared to how many years adults have lived, children have time on their side. It is like they are riding in the lazy river, enjoying life.


So what can one do? As I pondered this it came to me that one of the things that makes me the happiest is that I have spread the births of my children out over a 20 year time span. My first son was born when I was 21 and my final baby, when I was 41. So as a result I still have little kids in my life. Ones who have time moving slower than mine. This makes me have a much deeper appreciation for life. I can still marvel at the little things that children discover. Life is more fun with kids around. For those of you who are beyond this stage, then I imagine Grandchildren would suffice. Grab hold of the nearest child you know and hold on tight. Perhaps we can slow down the river of life that we are in, to match the gentle flow of the lazy river that children play in. 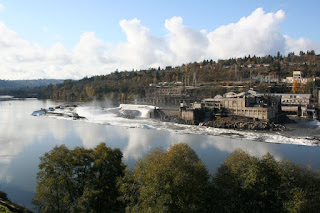 Willamette River, OR: Photo courtesy of Jaci from CCU
Posted by Colleen at 2:47 PM 1 comment: