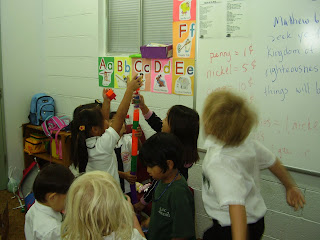 I'm using the "strew" theory in my class right now...just "strew" all kinds of educational items in front of kids and eventually they will learn. Today at least an hour was spent with several children working together to stack all of the peg board pegs into a tall tower.(Discovery Toys) It involved cooperation, balance, and interaction amongst kids aging in range from 3-8 years of age,including one of my 21 year old aids. This was completely child instigated and was a big hit as a "game" to play. I loved watching them figure out that the person standing on the chair, trying to reach the top of the column, could only reach so high and a taller child was needed to take over.

Eric, my own child, needs constant attention. I have to find specific things to keep him occupied, or he wants to be the center of what is going on. Even if this means getting negative attention. I did find a cool comic book template on EnchantedLearning.com (My $20 membership is finally paying off!)and gave this to Eric yesterday. It occupied him the entire day, with various times for snack/play/recess/lunch etc. But basically he was engrossed and excited and made a super cool comic. I plan on scanning and putting it online soon. It will need a bit of explanation notes for non-Eric comic book connoisseurs to understand...but it is really cool. He started a new one today and we read his first one in class. It has prompted some of the older children to create their own comic too.

I also had to allow him about 15 minutes of alone time in the class during lunch, while the rest of the class played outside with the middle school kids. He really needed this "quiet time" on his own to regroup and calm himself. He can be quite boisterous and loud in class - both when he is excited about something and when he is disappointed. Which is often...sigh.