Where do curls come from

My daughter Cassandra (Cassie) has beautiful blonde ringlets. They hang half way down her back in golden curls. When brushed out they are wavy lines of soft down. Her hair is still baby fine and tangles easily. And of course she has her older sister's sensitivities when it comes to hair brushing. Needless to say we sometimes neglect brushing as often as we should because I hate to cause my baby pain. A few weeks ago, Cassie's hair had really gotten out of hand. It was clean, don't get me wrong. She swam daily and her hair was always being washed to get the sand and sea salt out. But not brushed after wards. Eventually the "rat's nest" in her hair really could house a small mouse.
One night I went to a lady's night out. My husband was out too for some reason and we both ended up home around the same time. When I walked in the house I saw Cassie siting on the living room floor watching or playing a video game. Her hair was neatly brushed and hung in smooth golden waves.
"Wow, who brushed your hair?" I asked her.
Stephanie, my 14 yo came out of the kitchen and admitted to the task.
"I saw a brush and said, 'Cassie, let's take care of this mess' and I brushed it."
"Were there tears?"
"Oh yeah, but I tried to be gentle."
From the queen of tangles, this was quite the remark. Takes a sensitive scalped person to deal with a sensitive scalped person I guess.
And after all, I deserve it. I gave my mom such a fuss over my hair. My girls were doomed to inherit the same issues.
Tonight I aso discovered proof that I also passed on the ringlet gene. 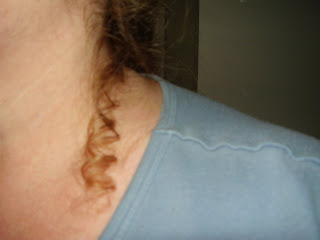 Awww! What a cute little curl! I had totally straight hair, but I still had lots of knots and hated getting it combed out. Same with my two girls, though the little one does have some natural curl.

I love curls! Curls are the reason I have not been able to cut Nathanael's hair. LOL.