This week Eric has totally amazed me with some of his artistic creations and writings. His sense of humor never ceases to awe me. I found an old Whiskers comic that I just love, so it is posted on his Adventures of Whiskers blog. I had a hard time getting that up as it's been so long since I first made it for him that I forgot how to access it.

Here is the History of the World according to Eric. 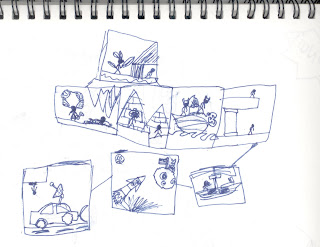 First panel is the middle row, depicting a cave man in a cave with stalactites hanging from the ceiling. Then it moves to the top row where we have a Shaman outside his grass hut. Reminiscent of how man moved from Cave dwelling creatures to building grass huts and hunting on the plains. Eventually man moved on to build the pyramids so we see the Egyptian phase of history. From the pyramids, we move onto the Viking stage, where Eric the Viking sailed from the cold northern seas and terrorized the rest of the world. Majestic pillars dominate the next panel, showing us the age of Greeks and Romans. Moving on in history, pirates took over the world (according to Eric, remember?). And finally we have the modern age of space ships and walking on the moon. The final panel shows what Eric hopes the future will hold. Anti-gravity boots for walking upside down on the ceiling and cars with antennae and pincher bumpers for picking up stuff in the road.

A little Squirrel saw a tree top
He saw acorns then up the tree he hopped
He ran halfway up, fell down
Oh how he wished he had the lot
Then he saw the pump station
Climbed up and then jumped
He stretched out his arms and flew!
He got to the tree top!!
Now he has those nuts!

I love when my children have these creative moments.
Posted by Colleen at 7:55 PM